It is said that every language undergoes a change after each distance of ten miles, and the same we see in Khowar. The area where Khowar is known and spoken has been famous for variation of languages and dialects. In Chitral and Gilgit, there are Villages where three languages are spoken at a time, and there are languages which have different dialects from valley to valley and from village to village. For instance, in the village of Asherit in Southern Chitral, four languages are known and spoken there:
1. Palola (80% Approximately)
2. Khowar (10%)
3. Pashto (10%)
4. Dameli (only known as 2nd Language)

The same is the case in Madak-lasht, Shishi Koh valley, in the same area, where three languages are spoken simultaneously:-
1. Persian 85% Approximately
2. Khowar 10%
3. Gojri 05%

When one goes to the Northern border, there are three languages in two small villages of Lasht and Brogil.
1. Wakhi 70%
2. Kirghiz 5%
3. Khowar 25%

No doubt, Khowar is the predominant language in Chitral and the upper valleys of Gilgit (Ghizer and adjoining areas), Yet there is considerable difference of dialects in various zones of the Khowar speaking area. People of each zone claim that, only their dialects is the original and correct one. Sometimes there are even bitter differences on this issue. For the stud of variation in the Khowar dialects, the area inhabited by Khowar speaking population can be divided in six zones.
1. CHITRAL AND DROSH: The first zone is comprised of the Tehsils o proper Chitral and Drosh. This zone has ben the seat of the ruler for the last six centuries, and people from every corner of Chitral have settled in the central places of this zone. Therefore, the Khowar dialect spoken here is a mixture of some common dialects. However, the zone has got a little variation in its dialect as compared to the 2nd zone. The difference found here is a variation of vocabulary, morphology, and phonology. Some verbs and nouns are pronounced in different way. The dialect has got some sort of popularity by the virtue of being spoken by a large number of populations in central places and towns of the area.
2. TORKHOW&MULKHOW: The upper zone of Chitral comprising the tehsils of Torkhow and Mulkhow makes the 2nd zone of Khowar. Actually, it was the original place where-from Khowar spread in the adjoining areas. Particularly the Tehsil of Torkhow is considered to be the birthplace of Khowar or at least the place where Khowar is found with its peculiarity and originality. The Tehsil of Mulkhow is next door neighbor of the former., and it is said that Mulkhow has also preserved the originality of Khowar. At present the same dialect of Khowar is spoken in these two tehsils. There is again some difference of morphology, phonology and vocabulary as compared to the dialect spoken in Chitral and Drosh.
3. BIYAR: Biyar means, opposite side of the river, and as a matter of fact, the Tehsil of Mastuj lies on the opposite side of the river, when it is seen from Torkhow or Mulkhow, and that is why is has been called “BIYAR” by the aborigines, living in Torkhow and Mulkhow. This area comprised of the main valley of Tehsil Mastuj including Yarkhun. Biyar has adopted and preserved a number of words as practiced in 2nd zone. However there are some minor differences which may be distinguished very lightly.
4. LOTKUH, KARIMABAD&ARKARI: The fourth zone of Khowar comprises of the three valleys of Lotkuh Tehsil. This zone is adjacent to the Tehsil of Chitral and it border with Badakhshan province of Afghanistan. Here, the difference of dialect shows a number of variations in morphology and phonology, while some of the vocabulary is the same as it is in the Ist Zone. Due to the Morphological changes in the punctuation of verbs, the dialect of Lotkuh looks to be distinct in conversation, even at the very outset.
5. LASPUR. The valley of Laspur is a part of Mastuj tehsil, bordering the Ghizar valley of Gilgit in the east. The population of Laspur has been influenced by their eastern neighbors and the language spoken here is a little different from that spoken in the other zones of Chitral. As there is no difference of punctuation in verbs, the Laspur dialect of Khowar is nearer to the dialects of Zone I,11&111.
6. GHIZAR,YASIN,WARASHGUM&ISHKOMUN: The sixth zone of Khowar comprises of the valleys of Ghizar, Yasin, warashgum and Ishkomon in the northern areas of Pakistan. This zone is deeply influenced by the Shina speaking people. Thus, the Khowar dialect spoken here shows a grat deal of difference in morphology, phonology, and vocabulary. The variation found in this zone is more clear than the one found in the dialect of the valleys of Lotkho, Arkari, and Karimabad. Here is a comparative study of the six dialects of Khowar. 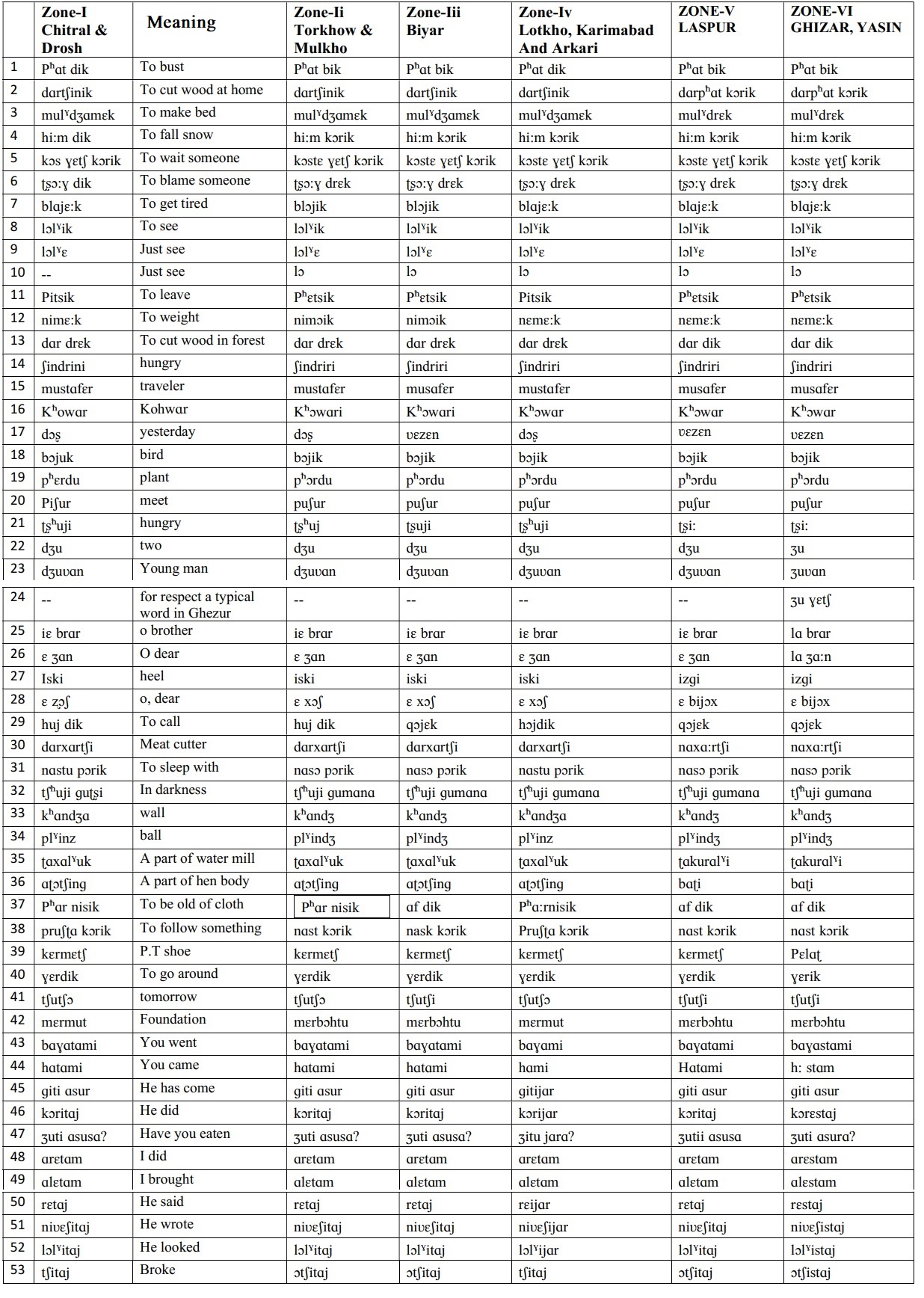 The study of a few examples shows that monor variations of dialect can be found in lotkhu and Ghizar zones. In the dialect of Lotkuh, past tense is quite different. Ist person is, however, the same as in Chitral and Torkhow. On the contrary in the dialect of Ghizar, past tense is different from other dialects. In the dialect of Laspur,thre are a few words,which are typically attributed to the same people, while other words are used in speech most commongly. For example there is a word “de” or there is another word “zhawo zhibom” (I shall eat your son).
De gec ( o my dear)
Zhawo zibom (I am angry)
Detailed study of all these dialects will enrich the vocabulary of the language.

Of course, Khowar has got every scope and efficiency, required for the survival of a language. The only hurdle in its way is the backwardness of the area where it is spoken. In fact, Chitral is a heaven for a geographer and a natural laboratory for a linguist, but who is there to jump into the sea of dust and darkness. Perhaps nobody, yes only a few who are helpless and hopeless.