Being one of the ancient languages, Khowar has made a narrow escape to reach these days of love and search for such treasures. The area where it is spoken, ie Chitral and Gilgit in the Northern parts of Pakistan, has been a high seat of learning in the near past, where Persian has served as a language of education and coordination, for quite a long time. It was feared that Persian may expel, push back, or oust out the aboriginal dialects of the area like Shina and Khowar, as it did in the case of Sanskrit in the plains in the sub-continent. Though the Dardic group including Khowar has survived even after many such dangers faced by it. Yet there has been remarkable change in the vocabulary of this language with the passage of time.

Khowar has been influenced by many languages like Persian, Arabic, Urdu, English, Shina Pashto and Sanskrit in the past and there seems to be a great deal of change in its vocabulary due to such influences. The change has got two aspects particularly related to the present day.
I. Extinction of original words of the language
II. Inclusion or intrusion of new words in the vocabulary of the language.

Khowar is under-going rapid changes of both the types. At one hand it gives up many words from its own deposit due to reasons or without any reason in some cases. No doubt there are some words which were related to some events, customs, tools, or something else of the past and such words had to lose their significant value with the changing society. For example, the names of out-of-date tools costumes and utensils of the old times or words or respect and other etiquettes related to the court of the ex-state ruler, have no mote to exist in this age. In the day-to-day conversation of the people. There can be no objection if some words which can still possess their position in the language, but these are also substituted by borrowed words having similar meaning . persons having their education through English and Urdu mediums and person having long association with Urdu or English-speaking people, have developed the tendency of replacing Khowar words with new breed from their favorite language and this unhealthy practice goes on. It drags Khowar under the influence of many more languages and time is to come when Khowar will be a mixture of these languages. Although there are grounds to hope for better, as endeavors are being made to pressure the old vocabulary of Khowar in prose and poems, yet we have to check the system of mixing Khowar with other neighbor languages. If we are helpless to stop the process of inclusion or intrusion of barrowed words in Khowar, we can … at least demarcate a specific line in between the necessary words to be borrowed and un-necessary words not to be borrowed.

Some new words of Khowar. 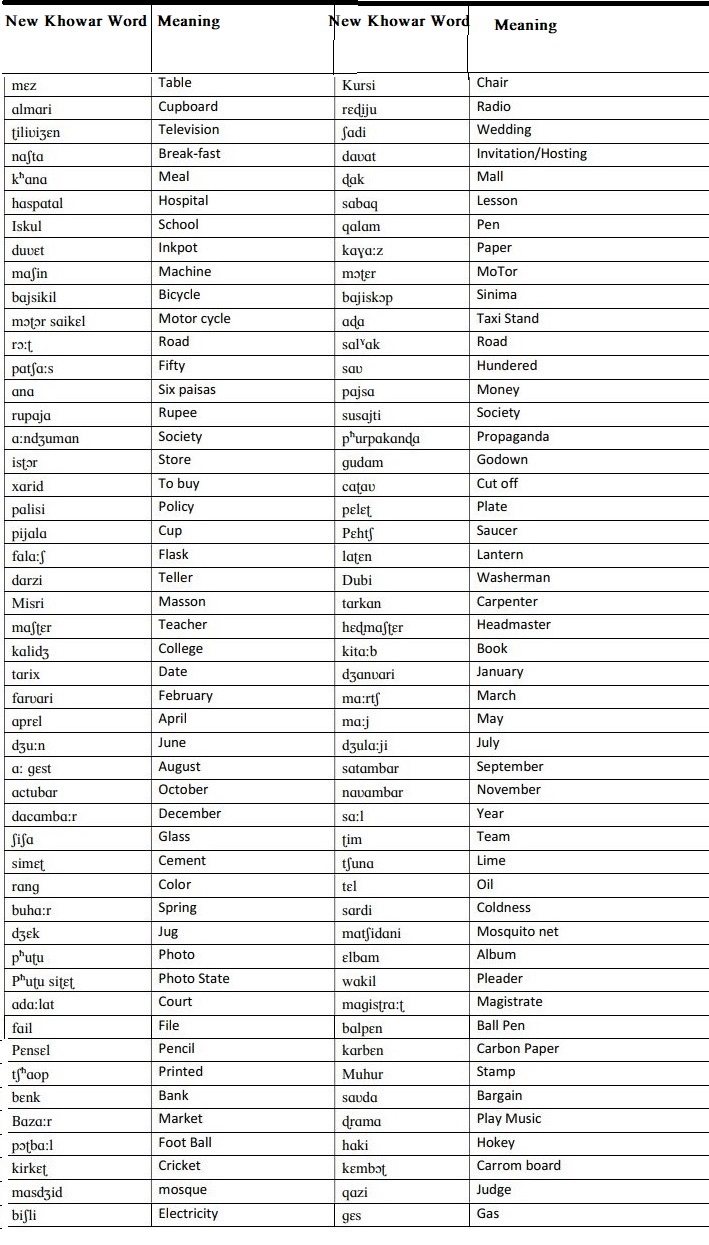 In the old vocabulary of Khowar, there are a number of words for birds,rains, foods and animals. Similarly there are different words for the voices and sexual intercourse of various families of the animals. Here is a table shwing some of such words.

Likewise, we have in Khowar, different words for different types and various stages of wood cutting. Here is again a table showing these words.

At the same time, we have no word in our Khowar new things like table, Chair Radio, electricity, ticket, member and so on and so forth, the process which Khowar has adopted for absorbing new and borrowed words for such things., has helped the language to pull-on with the needs of the present society. What is needed more, is to make concrete efforts to preserve the words dying out with the passage of time, so that the language may be able to get new blood without losing the base and veins to be used for its absorption.

Difference Of Morphology, Phonology, And Vocabulary In Khowar Language Spoken In Different Parts Of Chitral