Eurasian Magpie (pica pica) is an intelligent, shrewd and beautiful bird lives in Upper Chitral. Loosely starts from shachar (ݰاچار) to every nook and corner in upper parts of Chitral on which it prides. It doesn’t let crows to enter in this territory, and has kept its hold over it since time immemorial. In case a crow dares to enter into this territory the first magpie (کیݰیپی) spots it calls alarm of this territorial intrusion, is followed, targeted and either forced back to leave the territory or killed in this hot pursuit by a parcel of magpies afterward.

There is a local mythology which demonizes this unique bird that it has an evil spirit—a sort of monster and alien connections it inbreeds? This is all because of its vigilance and being active in tracking a commuter afar it calls alarm during night. In daytime whenever magpie finds a dog or a cat or fox (especially) suspicious it warns conspecifics an approaching danger, and, in turn informs predator that it has been detected. This ‘predator approach calls’ convey a social information about predator, instructs a parcel of birds form around and stay vigilant about it. 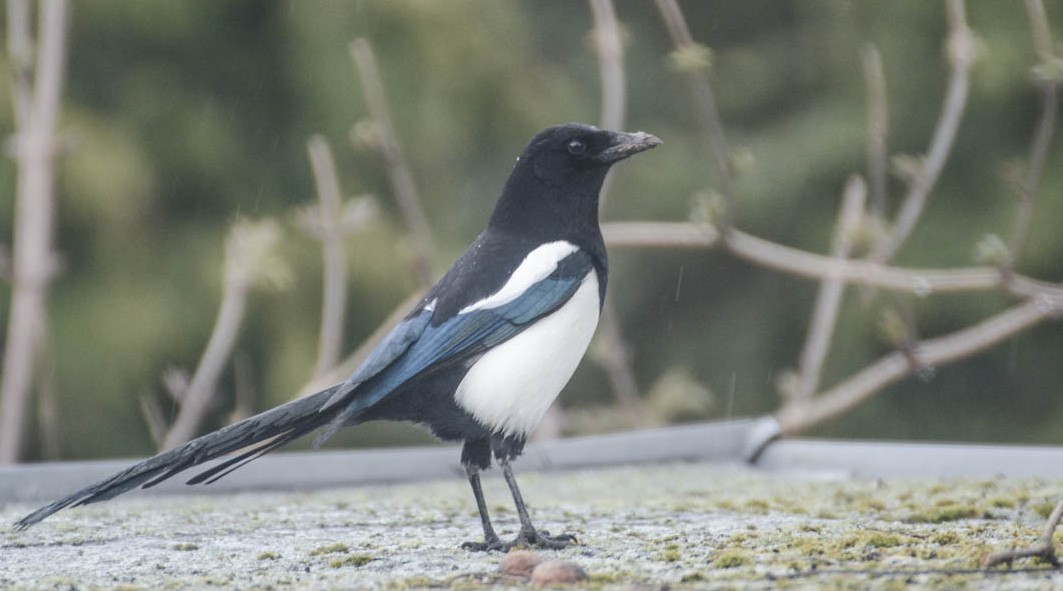 The attack of a sparrow hawk or an eagle on a flock of birds or descending upon a bird, going after it, however, has a different response from magpie. The alarm calls from magpie never cascades spreading disinformation to conspecifics. However, here it’s not intended to reify his vocal and bodily expression on a particular situation on which it responds.

Another myth about magpie goes that when it voices (ݰیقھیتائے) coming close to a home at dawn portents a guest arriving on that day. Bringing any news is also attributed with magpie in Chitral. Magpie unfolds in language formation in which many words and phrases have adapted in Khowar language over the years. Drawing a cue from magpie nest, any jumbled work and things is said to be like a thorny
magpie nest (کیݰپی ماڑی ، کیݰیپی ماڑیو غون ،غونہ). Someone is cleped Magpie (کیݰپی) as if it stereotypes women for their being tattletale.

Since a poetic analogy of magpie in Khowar abasing this genus but Dr. Ismail Wali signifies what is true of it. For him (and a ‘beloved bird’ of the likes) magpie is a ‘dinar’, and its prototypical features in a short poem so beautifully he has enclosed.

There has been no research in Chitral on the breeding ecology, timing of egg-laying, clutch size and breeding success in this little-studied habitat, however, magpie builds its nest, mostly in plane trees (چنار) set by thorny bushes with a canopy over it, in height inaccessible to humans. Its population continues to be limited but stable. There is however much to disinter about Magpie.

As a scatter hoarding bird, magpie caches food items, mostly walnuts in Chitral shows its cryptic nature of hoards secured from pilferers. This Corvid and its crucial role in spatial learning and memory, and how food-storing birds retrieve food is a debate in academia on spatial memory, neuroecology, and hippocampus size; and their role to have a superior ‘in tasks measuring spatial and learning capacities’ as compared to their ‘non-catching relatives’.

Many old trees of walnuts in Chitral, when people can’t attest the person planted it, are seeded by magpies. Magpies cache the seeds, and leave it untraced to grow into a walnut tree. This bird has a greatest contribution in afforestry during the time when there was no forest cover or were limited number of trees on different places.

Walnut by then, and now, has been a resourceful tree as its wood had been used for fuel. Its seed or kernel (ژوڑ) for eating, adding to different food stuffs and extracting its oil for cooking a special dish such as rice. And the shell (زالوکی، پرغاڑِک) used for dyeing woolen stuffs. Thus, many of the trees of walnut in forests and fields are planted by magpies contributed as a source of food, added to a balanced and sustainable environment and ecosystem in Chitral.

Magpie has been a useful, adaptable—with both environment and conspecifics, and contributing bird for the people and our ecosystem. The black and white colour combination of magpie is still apt to our divided society-of-colour. It is a name of intelligence, resilience and adaptability but for us a stereotypical and evil spirited bird. This supposition is yet to end.

We may excuse but magpie unfolds our midst in our lawn with conspecifics, with animals and birds in fields and settlements, and repeats as an added vocabulary in different meanings and expression in Khowar language.

Since magpie has limited population It should be protected from human activities causing its death.

Etymology of the Word ‘Mahraka’