Instruments play an important role in the music of Chitral, as many compositions are only instrumental without vocal inputs; especially the music associated with free style polo is only instrumental. Sithar is one of the basic instruments of Chitrali music, yet it is not exactly the same instrument called Sithar in Urdu. It is a stringed instrument but very different from the Sithar of the Indo-Pak classical music. 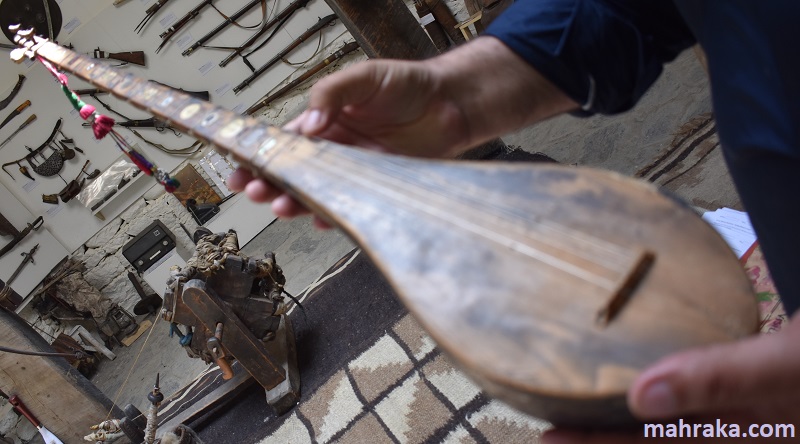 The word sitar is Persian, seh means three and tar string. It is reported that it was an instrument having three strings at first. When it was introduced in Chitral, two more strings were added but the name remained sithar in Khowar which means three-stringed. It is also because the three strings are the basic tune-generating role whereas the addition two strings are added for the purpose of percussion.

There are many versions as to how sithar came to be the major instrument of Chitral. One tradition is that a string instrument was introduced in this region by the Greeks who came with Alexander the Great. The instrument went under modifications and became what is now sithar.

According to a second version Hakeem Nasir Khesraw, an Ismaili preacher and sufi poet, came to Lot Kuh valley of Chitral. He had two instruments gharba (rabab) and sithar. He used these instruments for mystic chanting, and it is said that he was the inventor of Chitrali Sithar.

According to the third version sithar evolved indigenously in Chitral, especially in Sonoghor Village, and then spread into the adjacent areas.

A fourth version, according to Bulbul Wali Khan (as quoted by Sher Wali Khan Asir)-this instrument, which came from Iran, in the beginning had three strings, the fourth string was added by a sufi and sitar player of Iran named as Mushtaq Ali Shah Irani, who was stoned to death for religious beliefs, and hence the name of the fourth string is Mushtaq sim. When sitar was introduced in Chitral, the fifth string was added. The names of the different parts of the Sithar are of Persian origin like Perda, Tarkhana, Perda e Saz, Kharak, which are frets, bridge near the tuning pegs, reference note and the bridge near the tail peace in English respectively.

(This explanation is not based on primary evidence, and at best extrapolation through circumstantial evidence)
For the last five or six generation’s sithar is being made in the Sonoghor village of Upper Chitral. Sithar makers in the village have adopted this as their profession. One Muhammad Amin Badakhshani, hailing from Badakhshan, he made the village his home, started making sithar here. His grandson Muhammad Amin adopted sithar making a profession. He trained his son Rahmat Dad and after Rahmat Dad his son Khosh Qadam was into the profession. The son of Khosh Qadam named Muhammad Dabir Khan is still alive and considered as the best sithar maker. It is heard that the cousin from his uncle side, Muhammad Wazir Khan was also an expert sithar maker but he did not adopt it as a profession but only made customized sithar for the royal family of Chitral or whosoever he favored. But Muhammad Dabir Khan is still making sithars.

A contemporary of Khosh Qadam, Ghulam Ali was also a famous sithar maker. His son Firdosi becomes famous also and his sithar is also available now. After Ferdosi his son Nadir Ghulam was also a good sithar maker but he died at a young age. His brother Haidari also known for his craftsmanship has not made it into a profession. If the sithar was old and made by one of these master craftsmen or a known sithar player it is considered a prized possession. It was also very prestigious to own such a sithar but unfortunately none of the sithars made by them is available nowadays.

The lower part of sithar which looks like a bowl, the gourd is known as dori of sithar. Usually dori is made from mulberry (toot) wood. The wood of apricot tree can also be used for this purpose. It is hallowed to facilitate vibration and echo, which is required to produced standard sitar music.

The main portion of sithar is ghaaz which is about 3 feet or 3 feet 4 inches long. The thicker part of sithar attached to dori, is about 2 or 2.5 inches while the thinner portion with tuning pegs is of an inch. The front part of dori has a fixed nail where all the five strings are tied. The wood of mulberry is used for making ghaaz, which should be seasoned and straight. If the ghaaz is bending, the musical quality of sithar suffers and such a sithar is called dron. The ghaaz is connected with dori by special glue called shoreshp, are made by boiling pieces of leather.

In Khowar, paaz means chest. The upper portion of dori is known as paaz. It should not be thicker than one eight of an inche. It is attached to the dori by shorship (glue made of boiling peices of leather) and the outer portion jets out a little.

There are five Gushek having hole in which string of the sithar are tied. The shape of Gushek is like the letter capital T in English.

There are 13 to 16 frets in a Chitrali sithar which are made mostly from plastic cords. The frets are adjusted according to the tune, therefore the frets should be moveable.

One inch lower than the third tuning peg, there is a bridge which is made from bone. The strings pass through it. Its function is to maintain the distance of the strings and to keep the strings above the ghaaz.

There is a strong iron wire which is rolled twice or thrice between tarkhana and gushek. Its function is to support the strings in tarkhana.

Exactly in front of tarkhana is the kharek. It also keeps the stings above the paaz, 1/4 inch high and its length is 2 and 2.5 inches.

In the outer and lower parts of the dori, all the strings are connected to a nail known as iskow. Originally it was made from bone or horn but iron nail is used nowadays. Iskow should be strong so that it can bear the tension of the stretched strings.

Khowar word for string is sim, which are 5 in a Chitrali sithar. The very fine strings are more favored in a Chitrali sithar .It is very difficult to fit the string in the sithar, as the strings are very fine and break if carelessly stretched. That is why iskow and tarkhana are made very carefully so that that it keeps the distance to save it from getting entangled with one another. The five strings are rubbed with a piece of stone or clay so that these become straight and thin. At first one part of string is fixed with iskow and the other is wrapped with gushek. If turned from right to left it tightens and loosens when twisted from left to right.

This is the 4th fret, if we count from the above side. A little piece of wood supports the sim so that it does not touch the Paaz. It should be 1/5 in tuning so that it makes a drone. If the strings are in E note than Pard e saaz should be in B note. This fret is the reference note in Chitrali music and it is used repeatedly. The song starts and ends in this fret. If there are seven strings in sithar than there should be zil bacha which should be in the 6th string and with the 4th fret. Nowadays the tradition of

One should have very good ears for the tuning of Chitrali sithar. The frets of sithar should adjust according to the song. The third string should be tune in 1/5 or in other words, the third string should be four notes higher than the rest of the notes while the other four are in unison. Melody is played on the top two strings which are fretted together. If the sithar is tuned in higher notes then it is called zil while bum in the reciprocal. Therefore, singers need a high volume and voice throws for zil and slow sound for bum. The modes of the Quqnuzo Hung has four musical sounds namely; Kroikumoru, Berangi, Ali Sher Khan and Noor Quli, which can be played on sitar or flutes by a soloist.

A proper environment is needed to listen to sitar and to grasp the composite core sound of it. It becomes a meditation to listen to the core sound in the background of the sitar because it ties every note together. Notes appear and disappear, but one should get awareness of the central core or the deepest current which holds all the notes together. One has to allow the music of sitar to flow inward and to touch the inner sound to become alert and aware. After that awakening one will become omnipresent. The finiteness is with the mind while infiniteness is with the meditation.

The mode of Chitrali sithar is aeolian, which is asawri in Indian classical music. Ragas in asawri thaat are asawri, darbari, desi, jaunpuri, adana and gandhari. Therefore, the mood of Chitral sithar trickles down sadness. Sadness gives depth while happiness gives height. Sadness gives roots and happiness gives branches. One is going towards sky while the other towards the womb of the earth and both are needed. Sadness is dominant in our music because the entire culture of the subcontinent has only experience pain deeply while love, compassion and other emotions of human being has not been experienced deeply. It is lack of human experience and perhaps a process of evolution. Otherwise the different dimensions of experience have their own beauties and realities. Therefore, the musicologists not only emphasized on music but the appropriate environment and learning of music to touch the mystical dimension of life.