The Kalash people celebrate a number of festivals during a calendar year. These festivals are of much interest and veneration for the people, as they arrive in droves to participate. They say there were three hundred and sixty Kalash festivals in past but most of these are forgotten now. But still they celebrate scores of festivals during the year. Almost every festival is connected to the calendar and the Kalash want to do something which is conducive on that day in the rest of the solar system. This is because our body has come out of the earth and solar system is working like a wheel to generate this body. So, what happen to the solar system has an impact upon the body and the festivals are according to the changes in solar system and agricultural seasons. On occasions the energy in the solar system is rising therefore it is very necessary to raise the energy of the body. The Kalasha raise their energy by nonstop dancing and singing. When the energy is moving upward then human should help it by doing some activities rather than sleeping and slow down their activities. Here the music, entertainment and dances help them to be active and alert with the rising energy in the solar year. All Kalash festivals involve music and dances as there integral part. Only the winter festival Chowmos is unique for that is celebrated without or with little instrumental music. 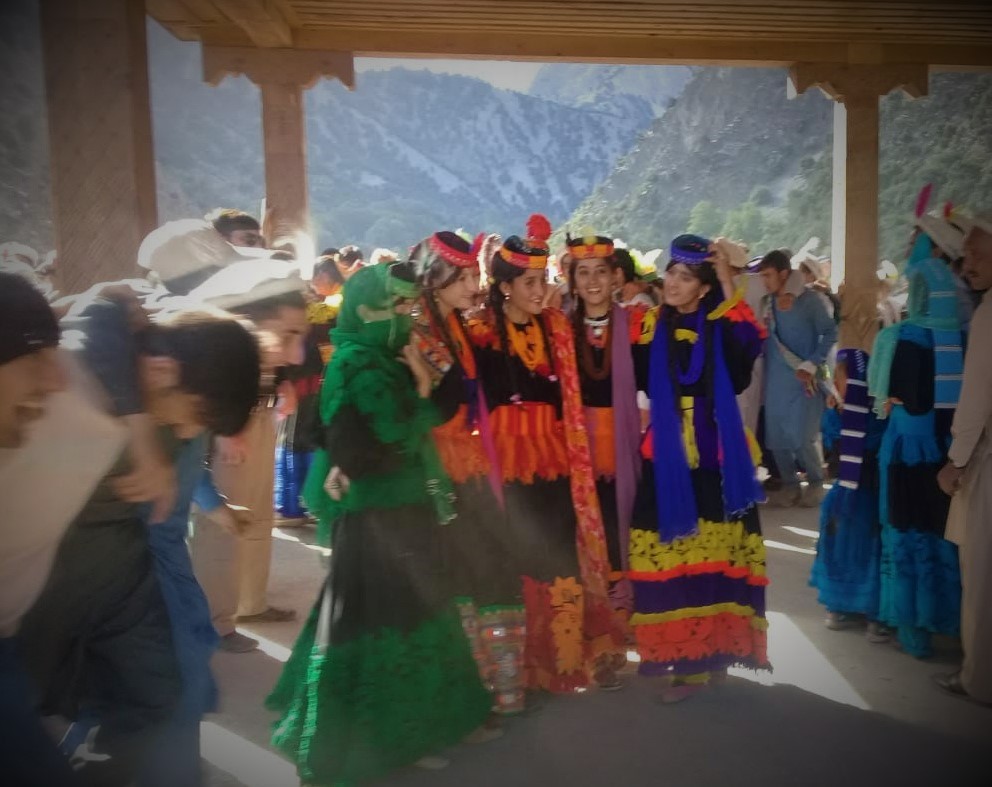 It is the longest and most religious-like festival for Kalasha because every day and everything has to be purified during this. Some adults cut cedar tree branches and burn them, thus creating a thick smoke, a message to their god mixed with the blessing hymns and songs. Then, singing and chanting they move forward to collect dry fruits from each house. After musical events they share among themselves the dried fruits, enjoying the festive movement. This part of the festival is known as Sarazari which lasts from 9 to 10 December. During this festival rituals and praying are mixed together with chanting and singing and dancing and amusement. In this way the life force activates which gives positive energy to the body. As it is, our body consists of water which is more than seventy percent. The sound has an impact upon the molecular structure of water and activates the body energy. It is the period of intoxication when wine drunk and they abstain from sexual and worldly affairs. It is worth mentioning here that no drum or flute is played during this festival.

For the next two days, they purify the goat sheds with juniper branches smoke and are called Sarsdik. Next day they perform husatik (spiral-like circular dance) dance. They all start praying and singing cawmos songs and dancing by forming a chain as they hold each other from the back of their waist. They are moving towards the village chanting Lahoo, Hoo-Hoo-Hoo. Their destination is the temple. Then they dance in a spiral-like circle (three circle one inside the other); this form of dance is called husatik. Then they dance in separate circles, singing and clapping Bayak o Bayak o, my dear brother. In Kalash culture an enormous amount of attention has been paid to what are the things that physical body can do, and what sort of movements and postures would lead to the advancement of individual human being who inhabits that body; if he use the body in certain way. The classical dance of our subcontinent too, is based on very exquisite positions of what the body can do, not in terms of acrobatics but in terms of various movements that one can do with the body gracefully; with a deep and very profound involvement on the level of emotions. A certain rhythm and mathematic to all that the performers are doing. Similarly, the Kalash dance also evolved from the emotions of their happiness and grief, wonder and suspicions. It is the exuberance of expressions of what human beings can be and is also a means to achieve certain freedom and liberation. According to Kalash the closest explanation that one could give for the phenomena of creation is dance. All creatures when at their best burst forth into dance.

Next day they perform the ritual of feeding the spirits of the dead is called Sharaberayak. Every Kalasha household must prepare food for the dead and take it to the temple; inside the temple all Kalasha are in absolute silence. Silence of hearts is the only way to share, merge and transfer the truth. Silence has its own sound although outer ear cannot hear it. Just like outer eyes cannot see the inner light. Silence is invisible to the outer eyes but not to the inner one. Our outer senses cannot touch it but the inner heart is absolutely immersed in it. When the whole lake of consciousness is simply silent, and has just become a mirror. In that rare movement one can hear the sound of silence. It is the most beautiful experience because it shows a quality of inner music and the inner world is full of harmony, joy, blissfulness. If one has to be utterly calm and quite then there is the sound of silence. When someone hears the sound of silence then one will hear the very secret of existence. In this way one will become so subtle that one deserves all the mysteries to be exposed to oneself. The sound of silence has its own symbol which is beyond language and it does not mean anything as for as mind is concerned, but it means tremendously much as far as ones spiritual growth is concerned. After this meditation the Kalash eat the food and go back to their homes.

Then purification ritual with pure bread performed by a young girl is called sawelik hari. A young girl drops some bread onto the fire. Meanwhile all the women start singing and dancing individually. They sing Kalasha song Pari shalay Asuretanu tayar ne shiau hashas riwish ow “Go over there people from Asuret (a side valley valley in lower Chitral), ready not is the horse’s grain”. Boys wearing mask enter the dancing area and dance the cutakey dance, a wild male dance to be repeated on 20 December. The dancer never allows his mind to interfere with what is happening and gives his body to express what is there. The body, mind and soul all fall into a harmony during dancing. A real dancer loses his ego in it and forgets that he is. During dance the soul, mind and body are not separate and all have fallen in one line merging with each other and then the door open because an individual become one unity.

Sisaw adua, is the day of purification of women with pure bread and is celebrated on 17 and 18 December. A man after taking bath burns a juniper branch. He purifies the women with juniper branch smoke, swaying it all around their head. Celik Sambik is a ceremony in which a four up to seven years old boy or girl is brought into Kalasha society and will wear the Kalash costume and headdress. It is the night of great enthusiasm and entertainment. They sing, dance, eat and drink wine making bonfire inside and outside the houses. They sing khai o may bata hiu ‘it will become mine’. Chulaw ne bandai ‘your daughter you did not teach’ or they sing Galai, Gal ai ne bhas! ‘Dance, dance you cannot (dance)!

Next day, on 19 December, the morning a child is dressed the Kalasha dress for the first time and enter the Kalasha community which they called Gosnik Copa. While a little girl is being dressed, the mother will chant Homa chu gaa hiu ori ‘ our daughter should grow up’. They are dancing by the beat of clapping and by the singing while wearing white turban children are singing Distarik ta mo tuki. Tu tuki, lawak tuki. ‘Don’t push the turban. You push you push the fox’.

Then chanjarat, “the night of torch-lights” is celebrated on 20 December. This day is dedicated to one of their great god Balimahin. The women sing a slow caumus song, Balimahin ta uncundaw, Balimahin indeed has come, O gum bi oni! Oh wheat seeds bring! The chanja ‘the torches’ is made from a kind of pine wood. Some men and boys get involved in making torches. This activity is done by singing and dancing. They sing Galai gal ek ne bhas. Kawei bhaas! ‘Dance, dance you cannot dance! From where (how) can you do it?

Then they move forward to the sanctuary called Indrein to see off Balahimin. They light a huge fire and sing and pray to Balahimin asking for health and fecundity.

Now they move back to Batrik village where they had left the women. Here they are all enjoying a frenzy dance, with men dancing the cutak singing cutaak ey cutaak ey! The cutaak is a wild dance performed by two men making sexual gestures: one holding an object in front of his abdomen is chasing the other one, who is holding his figure in a way that they form the shape of female sexual organ. Sex is prohibited for Kalash in the previous days of chowmos and now they can have sex after this festival. Then next day the boys are dressed up in women dresses and headdresses and young women wear men’s clothes. All the disguised men and women came together at the dancing place of Brun village. They sing and dance with great enthusiasm and the scene come to a climax. They sing Isprupasa tay pasha, uzhuna aprashmis ‘in my dream seeing you, at dawn I forget you. Heyran apashis a. Ajai apashis. Surprised I saw (you) stranger. I saw you. Tay asta gri parim Biriu Kalashadesh. Taking you also (I will go) to Birir valley.

There were two restrict dimensions of dance in Indian culture. One is the pure fascination with movement, as extolled by human body while the other is the ability to tell a story through gesture and movements. The local dance in our sub continent was to tell a story, usually of an epic nature, but some also took delight in the physical movement rather than attempting to tell a story. The trend of dance in the northern area is mostly to support lyrics and music. It is necessary for both the performers and the spectacles to involve and participate in music. Different words, phrases and whistle are used by the Kalash for this purpose. The joy of life lies is in the involvement with life rather than avoiding it. The only way to know anything in your life is with involvement. In modern world what is lacking in people is lack of involvement. When involvement becomes discriminatory it becomes entanglement, here; total and conscious involvement is very important for these musical programs. In Khowar musical gatherings too, Khez, hoo, snapping and clapping etc is used intensely to involve and enjoy the programs. Since morality has become the major determinant of everything, the adjacent cultures of Kalasha do not consider performing art as a part of their culture that should be proudly owned. But Kalasha proud of their culture still consider music part of their religion.