Translated from Urdu by Rumana Husain 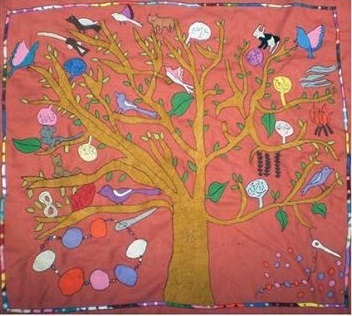 The story was sketched and embroidered by Nabila, a Chitrali student,
for Adil Iqbal, a Scottish fashion designer.

A bird was sitting on a bush, stringing some pearls together. Suddenly, one of her pearls slipped and ended up inside the bush. The little bird tried very hard to retrieve her pearl but the foliage was so thick that she could not do so.

When the bird finally got tired of trying, she requested the bush to bend her branch in such a way that it would reach the ground and look for the lost pearl.

“Nothing doing!” said the bush haughtily. “I am not going to do any such thing which will bend my branch forever because of a little pearl.” The little bird was quite offended and annoyed. She saw that close by in a house a fire was lit and the chimney was spewing smoke. The bird went over to the chimney and looking down at the fire she complained, “Fire, fire, please help. That bush over there refuses to find my pearl lost inside it, please burn down the bush!”

The fire was indignant. “Why should I waste my time trying to burn damp branches when I have plenty of dry fire wood around?” said the fire.

Close to the house flowed a stream with clean, sparkling water. The bird flew over to request the stream to blow out the fire with its water. But the stream was busy with better things to do. “I am going to water a garden full of beautiful flowers. Why should I give that up to put out a fire instead?” And the stream continued to flow. Upon hearing this, the bird flew over to a field where it saw a bull feeding on the grass there.

“Mr. Bull, please listen to me. This water is not doing what I am asking it to do. Kindly drink it all up. I’ll see then how it can go on to water the flower beds!” the bird said. But the bull apologized. “You see bird I have been hungry all night and have just started to eat, so I cannot drink all that water on an empty stomach. Let me have my breakfast in peace. Sorry!”

The bird then went to a cove in the mountain where a wolf was waiting for something. “Please listen to my plight Mr Wolf,” said the bird, “you reign over these mountains, so you should know that the bull over there does not fulfill a small request from a little bird like me. I say, eat him up, make a meal out of him!”

“No, I can’t do that.” The wolf said. “I have my eyes on a plump sheep that the shepherd has in his herd. I am waiting for him to bring his herd closer before I pounce on it. Why should I give up the tender, juicy sheep and waste my time trying to chew the old bull’s tough meat?”

Just then a hunter appeared on the scene. As soon as the bird saw him she shouted, “Hunter, hunter, man just look here, there’s a wolf hiding in this cove here. Get him. Kill him with your gun!”

The hunter shrugged his shoulders and said, “Oh well, I have just a bit of ammunition. I am climbing up to get to a mountain goat, the Markhor. Why should I waste it for an animal I can’t even eat? Let the wolf be.” And he went away.

The bird then met a mouse and said, “Mouse, look at that proud hunter going there with his hunting ammunition in the leather case strapped around his waist. Climb on it and make holes in it with your sharp teeth so he has nothing left to make that kill of the large animal.”

But the mouse wasn’t interested either. “I am just coming from the kitchen of that house where I had plenty to eat. Now why should I bother and weaken my teeth over a dry piece of leather?”

Just then the bird saw a cat and persuaded it to kill the mouse. The cat said, “I was given a bowlful of milk and cream by a grandmother. I don’t need to run after that mouse!”

Grandmother was sitting in the courtyard of her house working the spinning wheel when the bird called out to her and said, “Grandmother! Look, the cat has had your cream and milk. Why don’t you catch her and give her a beating or two?!” Grandmother said, “Forget it. The milk is spilled, wasted, gone. What good will it serve me to run after the cat now. Why waste time. I would rather work on my spinning wheel to make some more yarn.”

The bird became disheartened. It looked up towards the sky and appealed to God. “No body has come forward to help me. Only you can help now. Order the wind to blow away Grandmother’s yarn.”

Now at that very moment a gust of wind blew away Grandmother’s yarn. So she went after the cat, who went after the mouse; the mouse started biting the hunter’s leather case; the hunter aimed at the wolf, who leaped at the bull who forgot about his breakfast and ran to drink the stream’s water. The water changed its course and went over to the house to put off the fire; the fire went for the bush. The bush immediately bent a branch to look for the bird’s pearl, found it, gave it to the bird and the bird flew away chirping happily.

Rumana Hussain is a Karachi based editor and writer (children literature, art and human rights) .