Shah Buria Wali's story is a widespread legend of the Karakorum-Hindukush region. It is told in one or other version in different parts of the region. Another shrine dedicated to the same Saint stands in Nagar Valley. 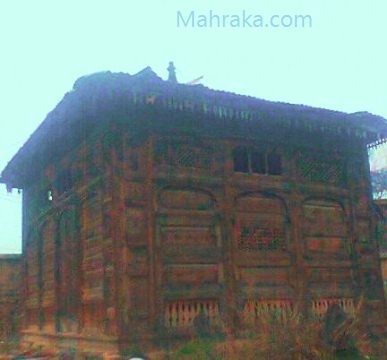 Chitral has been an ancient mountain kingdom, tucked between the mighty mountains of Hindukush, Karakorum and Himalayas. It was an important trading post and regional marketplace between India and the Central Asia. A branch of the historic silk route came down to Chitral and split into branches, heading towards Peshawar, Kabul and Kashmir. Traders, pilgrims, spies, religious missionaries and wandering mystics took respite here on their way to different destinations. Throughout the history Sufis of various strands arrived here from the Central Asia, Iran and Kashmir, and spread the light of Islam.

Many centuries ago three brothers who were also Sufi saints, Shah Raza Wali, Shah Muhammad Wasi Wali and Shah Burya Wali arrived in Chitral. The former settled in Sonoghor, the second one went to live in Rech, Torkho, while the last one, Shah Burya Wali, made Chitral- City, Lower Chitral, the centre of his spiritual activities.

Chitral, the capital of the princely state, was a bustling city and an important centre of socio-economic activities of the region. ‘Raes Dynasty’ was in power at that time. The peace-loving Sufi felt at home upon his arrival in Chitral. Within a short span of time his pity and knowledge attracted a large following. His message of peace appealed to the hearts and minds of the commons as well as that of the ruling Aristocracy. Even the Mehtar (local King) became one of his devotee. The monarch would often seek his blessings and advice on spiritual matters. The cordial relationship between them thus grew stronger day by day. When the wise and humble saint passed away, the king as a token of respect arranged a state funeral for him; participated personally in his funeral prayers, and buried him in the royal graveyard within the Citadel.

A week after the demise of the Sufi saint, a miraculous incident shook the very foundations of ruling royal family, eventually leading to its downfall. According to a legend, it was a regular evening Darbar, and the royal court was packed with courtiers from the king’s inner circle. Amidst the hustle and bustle came a royal-guard with a special message. He informed his majesty about the arrival of a person returning from Badakhshan with gifts for the monarch. The king immediately summoned the visitor to his court.

The visiting person then began narrating his meeting with Shah Burya Wali in way. He said to the king, "Your Majesty, When I was crossing the mountain pass of Dorah on the Chitral-Badakhshan border, I met Shah Burya Wali. He said to me, please give these two apples as my gifts to the king and Sangeen Ali." By saying so, he presented both the apples with great reverence to the monarch.

The head-strong king didn’t take his whole story seriously; for him the whole incident was not more than a prank. He refused to accept the gifts, rolled them under his throne.

Sangeen Ali, a close aide of the king, secretly picked both of them up; kissed them out of respect, and took them to his house by hiding them under his cloak. At the dinner he and his wife ate the apples. Out of sheer respect and overwhelmed by emotions, he buried the apple cores and seeds in the premises of Shah Burya Wali’s resting place.

On that same night the Sufi saint came in the Mehtr’s dream with visible signs of annoyance and anger on his face. He said, "It was my wish to bestow upon you and your progeny a long-lasting kingdom over the vast territory of Chitral. In the same way, I wanted to see the post of Royal Vizier to be remained in the hands of Sangeen Ali and his family. You refused, but Sangeen Ali on the other hand, took both of them. In plain words, he snatched both the opportunities from you." By saying that Shah Burya Wali disappeared.

The next morning the Mehtar woke up exhausted with fear and anxiety. He ordered to excavate the saint’s tomb to verify the dream. To his utter horror; except a shroud nothing was inside. The saint’s body was missing! That day onwards the balance of power began to tilt in Sangeen Ali’s favour. Sangeen Ali was blessed with two sons, Muhammad Raza and Muhammad Baig. They grew up to become the real power behind the throne and the king became only a titular ruler.

In the years to come, Muhammad Baig’s progeny succeeded in overthrowing the ‘Raes Dynasty’. Muhtaram Shah alias Katur, one of Sangin Ali’s grandson, became the first King of Katur line in Chitral. Another grandson named Khushwat, founded a kingdom in Yasin in Gilgit Region, where his family ruled for the coming days. Katur Dynasty remained in power for the next three centuries. Offspring of other sons of Sangin Ali also flourished and prospered. Today these people make a great part the population of Chitral and Ghizer Districts. Remnants of the Raees Dynasty are only a few and hard to find. It is said that the apple tree on the Saint’s shrine was alive and bore fruit till the end of the Chitral Princely State in in 1960s. The small shrine can still be seen to the south of the old Mosque in Jang Bazzar Chitral.